Investing in Boston Beer has been a mug’s game this year.

Since hitting a 52-week high of $325 in January, shares have tumbled by more than $100 amid flagging demand. However, investors should stop crying in their beer and hoist a glass to the opportunity offered by Boston Beer (ticker: SAM ).

Beer industry consolidation is Topic A today. SABMiller ( SAB.UK ) confirmed that it is being courted by Anheuser-Busch InBev ( BUD ), a potential deal that would create a brewing giant worth more than $250 billion. SABMiller’s London-based shares rallied by 20% while Anheuser rose 7% and Molson Coors Brewing ( TAP ) jumped 14%. Boston Beer, however, wasn’t invited to the party, climbing a mere 0.4% to $223.04. 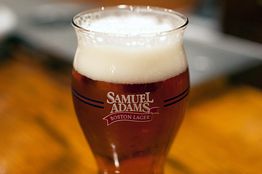 While a takeover of Boston Beer is possible (more on that below), pessimism surrounding the stock seems overdone, especially considering that almost 19% of the float was being sold short as recently as Aug. 31. Boston Beer sales have taken a hit from smaller and nimbler companies but is battling back to revitalize its iconic Samuel Adams Boston Lager brand, while investing in new products that cater to changing tastes.

Founded in 1984 by C. James Koch, Boston Beer revolutionized the beer industry by taking a family recipe for a craft beer, which he named after a revolutionary war patriot, and turned it into a national sensation.

In the eyes of some hard-core fans, the company is too big to be considered a craft brewer. Today, Boston Beer sells more than 80 beers under the Samuel Adams brands, as well as malt beverages under the Twisted Tea brand and hard ciders under the Angry Orchard brands.

Until 2015, Boston Beer has been a smash success. Its stock more than tripled between 2012 and early this year but has since tumbled 30% as the company reduced beer volume growth guidance and reported weak sales for the Samuel Adams brand. However, most of the risk seems to be reflected in the stock.

Boston Beer is growing profit briskly, with earnings of $7.35 per share expected this year and $8.37 next year. The stock trades at 26.6 times projected 2016 earnings-per-share estimates and long-term profit is expected to rise 17%, which translates into a reasonable 1.6 PEG (price-to-earnings growth) ratio. The broader industry is seen growing profits 12%.

With sales of $980 million last year, Boston Beer is one of the largest remaining U.S. headquartered beer makers. So it did not go unnoticed in July when Koch, while testifying before a Senate subcommittee about increased takeovers of American beer makers by foreign companies, said he’d “likely be the last American owner” of Boston Beer and that bankers regularly pitch him on selling the company.

The comments raised questions about a possible sale with some investors expecting a foreign buyer to step up. Now, however, is not an ideal time to seek out a buyer given Boston Beer’s share price performance. And Koch, who controls the company’s class B shares, seems in no hurry to sell (even if a weak stock price and industry consolidation entice potential suitors).

With new packaging and a national ad campaign, Boston Beer expects results for its Sam Adams brands to rebound next year. Meanwhile, Twisted Tea, Angry Orchard and Boston Beer’s other supplemental brands are driving growth in depletion, a key metric that measures how quickly products move from the warehouse to consumer outlets.

And through the company’s Alchemy & Science subsidiary, an incubator business it launched in 2011, new products are hitting store shelves. That includes new craft beers, as well as Traveler, a line of fruit-flavored beers known as shandies, and Coney Island Hard Root Beer, the latest product from the 2013 acquisition of the Coney Island craft beer brand.

Though demand for Boston Beer’s stock is down, we think things are looking up.